Flame Bearers is back for a third season! What started as an idea, has taken off over the last two years as we’ve built this community and listener base across 47 countries. Ready for more? We are.

So, what does Season 3 have to offer? Here’s what you can expect:

What To Look Forward To

Over the last 2 seasons, Flame Bearers has been a platform built for celebrating the untold stories of women athletes and their incredible journeys to the Tokyo and Beijing Games. We focused on what went on leading up to and during the Olympics and Paralympics – we discussed training routines, mental health tactics during the pandemic, staying positive while competing far away from one’s family and friends, and staying focused despite not knowing if the the Games would even happen .

We already know that less than 4% of all media coverage goes to female athletes* (Women’s Sports Foundation’s 2020 Chasing Equity Report, please cite), and almost 100% of that goes to covering the lead up to and during major events. But what happens next? Beyond the spotlight and after all the celebrations and medals are done and dusted, what then? Ever wondered what goes on when these Olympians and Paralympians descend from the podium and are transported back to their daily lives?

Season 3 showcases these stars when the fans and cameras have gone home. We discuss what their daily lives are outside the Games, plans for the future, and what their various accomplishments mean to them.

A Sneak Peek at Some of the Stars of Season 3

We are not going to tell you everything, but there are a few teasers we would love to share with you. After all, what’s a preview without a look at the main stars?

With that in mind, we’ve highlighted 5 different athletes who will be gracing our upcoming episodes. We look at who they are and the stories they’ll share.

We start with a legend from the beautiful game of basketball

The 41-year-old, American basketball Veteran is one of the stars of the Seattle Storm who ply their trade in the WNBA. Sue started her basketball journey way back in 2002 when she was the first pick in the draft. Fast forward two decades later and she’s regarded as one of the greatest the sport has ever seen.

Sue boasts the record as the only WNBA player with titles in three different decades and she has a gold medal from the Olympics to add to her collection of individual accolades (which we must say make quite a long list).

In the episode featuring Sue Bird, we look at how the 4x WNBA Champion became a key figure in the campaign for social change and advocacy.

From the tiled floors of the basketball court to the freezing path of snowboarding, the next star athlete to look forward to is a half-pipe specialist.

Born in 1992, Liu Jiayu is a Chinese snowboarder with a knack for the half-pipe. Liu began showcasing her snowboarding prowess when she was barely 11 and since then, she’s amassed over 6 victories in the world cup as well as a victory at the FIS Snowboarding World Championships of 2009.

Her most notable accolade is her silver medal at the Olympics and China as a nation couldn't be more proud of its representative.

The half-pipe specialist will give her view of what it’s like to compete in her home country and how and why she strives to ensure that the snowboarding fun lives on in the hearts of all who love the sport.

Still in the field of the cold terrains but this time, an alpine ski racer.

Born November 15, 1992, Sofia Goggia is an Italian alpine ski racer that specializes in the speed events of downhill and super-G. Her immense quality is backed by her various accolades, most notably her silver medal at the Beijing Olympics.

She’s also the first Italian female athlete to win a gold medal at the Winter Olympics. A nice medal to have alongside her 3 downhill world cup titles.

When we welcome Sofia Goggia to the new season, we take a different turn and learn from her the huge challenges of recovering from an injury. Our encounter promises to showcase the importance of mental toughness to athletes.

What happens when one female athlete decides to mix up sports with another profession?

A bobsledder, track and field runner, and doctor. Seun Adigun sure puts the multi in multitalented. The Nigerian is a 100-meter hurdles specialist who previously won gold for her nation. She's also part of the women's team which became the first to represent Nigeria at the Winter Olympics.

The founder of the bobsledding team of Nigeria will explain how it feels to be the first African to compete in both Summer and Winter Olympics. Also, we learn from her about the huge perks of a diversified Olympics.

Despite her current imprisonment, the story of Brittney’s life outside basketball is one to look forward to.

Another basketball legend on our list, Brittney Griner is an American WNBA player who played for the Phoenix Mercury. She's an 8x WNBA champion, 2x WNBA defensive player of the year, amongst a host of other accolades.

Brittney can boast of being one of 11 female athletes to receive an Olympic gold medal, NCAA championship, FIBA World Cup gold medal, and WNBA Championship.

In our upcoming season, we discuss with players from the Phoenix Mercury of the WNBA the inequities facing women's basketball.

Well well, that was quite the season teaser right there, don’t you think? We’ve got all these amazing stories from the incredible athletes waiting to be released. And the best part? That’s not all we have lined up in our season. Are you ready for Flame Bearers Season 3? We know we are! 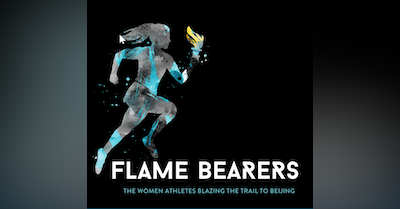 Whatever their role, they all make a difference in our lives. Ergo, we call them "Our Flame bearers."