The Making of Lea Davison’s Episode 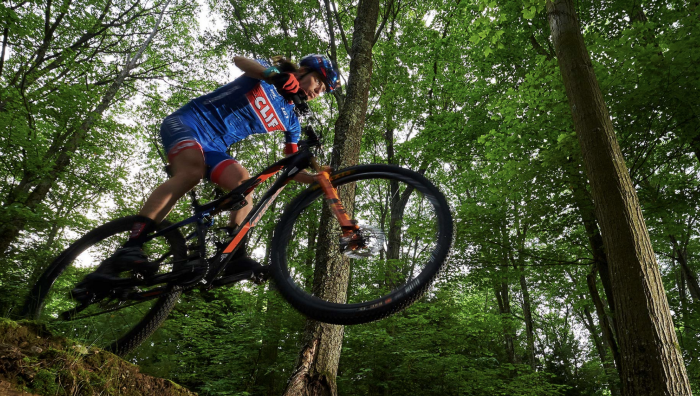 From the moment I secured funding for this effort, I knew I’d want to feature Lea. I had heard about Lea several years ago from one of my mentors from my alma matter, Middlebury College. Lea was a fellow alum a few years ahead of me. Besides my mentor’s recommendation, I had read a Midd Magazine (alumni magazine) article on her titled, Lea Davison Is the Most Badass Mountain Cyclist on the Planet. Obviously, after reading the article (and being convinced of her badassery), there was no way Lea was not going to be featured.

As a result, Lea was the first episode I produced in which I had a personal connection to the athlete. While I pour my heart and soul into every episode, our Middlebury connection made me work that much harder to impress her. I wanted to really knock her episode out of the park for her.

When I approached Lea, I knew three things about her outside of her professional mountain biking career:

What I did not know was that I was about to meet someone who would become a lifelong role model for me. Lea had a magnetically freeing personality that made me laugh and smile at the same time, even while we were discussing serious issues. As the show’s host, I am usually the one who makes the guest(s) feel comfortable and at ease, but with Lea, I was awe-struck by how open and unguarded she was from the very start. Perhaps she trusted me more because of our shared connection to Middlebury, or perhaps it’s just Lea’s personality, or a bit of both — all I know is that I felt like I was talking to a lifelong friend when I was speaking with Lea.

When drafting Lea’s episode I wanted to make sure to really spotlight Lea’s zest for life, so I spent hours combing through her social media. I came across her rapping about the Tokyo Olympics; even though the sound quality wasn’t as great as our recorded interview, I thought it was the perfect way to kickoff her episode as it gave listeners a sense of who she was. Further, even though Lea’s episode discussed her sexuality, it was really important to me to not have that be the only focus. I think all too often we boil people down to one trait: they’re gay, black, white, poor, rich, etc. In doing so, we’re able to lean on pre-baked narratives of who that person is. While we are biologically programmed to categorize and apply lessons learned to new people and situations, labels oversimplify things. In focusing just on labels, we miss out on the complexities of who people really are. Yes, Lea is gay, but she’s also hilarious, and fun, and smart, and started a nonprofit.

I put myself in Lea’s shoes and asked how I would want to be portrayed. Yes, her sexuality is part of her story, but by no means all. So I went from there.

After finalizing the episode, I went through the script and pulled out a few of the most powerful quotes and turned them into quote cards for marketing purposes. Once again, I shared these for the interviewees’ approvals. Finalized graphics are below; I used these in email and social media communication.

Lea’s call to action for how listeners can help is not something you can do quickly. As she says, we need to stop and just listen. We need to “realize that we don’t have all the answers.”